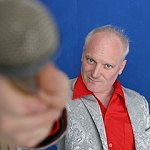 Zero Boy is an East Village icon and vocal acrobat. His solo comedic routines have been featured throughout the U.S. and Europe in theater, vaudeville, burlesque, television and radio. He has been featured in Fox and Friends, Good Day New York and MTV. Recently he played the evil Dr. Drago on Nickelodeon’s Alien Dawn, appeared Off-Broadway in the Yllana Production of ‘666’, and performed regularly on NPR’s The Next Big Thing in a special “Stump Zero Boy” segment.