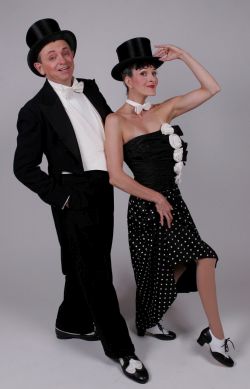 Wayne Doba and Andrea Conway-Doba have been referred to as a “throwback to the old Vaudeville days” … fans of the Moisture Festival know that that’s a great compliment and it means even more when you consider who said it, Donald O’Connor (kids, consult a search engine … find a video). Wayne and Andrea are a song and tap dance duo and they are comic characters who can change the nature of an event. Actress, dancer and acrobat Andrea Conway-Doba was already a member of Canada’s national gymnastics team who earned a Bronze Medal in the 1987 Pan-American Games before she spent eight years with Cirque du Soleil, touring with Saltimbanco throughout Asia, Europe and North America. Wayne shared the stage with dance legends such as the Nicholas Brothers and Honi Coles. His stage and screen credits include the role of The Creature in classic horror flick, The Funhouse, Octavio the Clown in Brian De Palma’s gang-buster hit, Scarface, and an appearance as Tex the Barker in the Prague debut of The Freak Show, an opera by enigmatic rockers The Residents. Together they have worked the spiegeltents of Teatro ZinZanni and, thereby, worked their way into the hearts of audiences in San Francisco and Seattle. We couldn’t be happier about their first appearance in The Moisture Festival this year. What a treat!