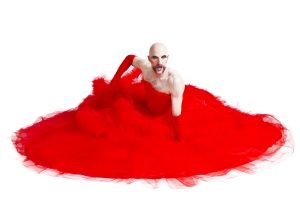 Waxie Moon, a gender-blending “boylesque” performance-art stripping sensation has performed at various venues throughout Seattle including Key Arena, On the Boards, The Seattle Rep, ACT Theatre, The Moore Theatre and The Triple Door. He has performed boylesque for Margaret Cho, Cyndi Lauper, Carson Kreseley and The B-52’s. In 2010 he was nominated for a Gregory Award (Excellence in Theater, Washington State). She is the subject of the feature-length documentary film Waxie Moon (directed by Wes Hurley) and is featured in the film A Wink and a Smile (directed by Deirdre Timmons). In 2009 he was voted “Best Burlesque Performer” by The Seattle Weekly (Readers Poll). Recently, s/he acted in, co-wrote and co-produced Waxie Moon in Fallen Jewel (directed by Wes Hurley).