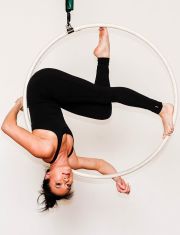 With dreams of dazzling since she was even shorter than she is now, Vivian began her beef cake aerial training at Hollywood Aerial Arts with Sagiv Benyamin. Previous confirmed sightings of Vivian dangling locally have included the Moisture Festival and Teatro Zinzanni’s Late Night Cabarets. She has performed in the US and Europe with the Aerialistas, under the artistic direction of Lara Paxton. Vivian is an aerial and flying trapeze instructor at the School of Acrobatics and New Circus Arts in Seattle and also instructs at Knotty Yoga in Redmond. Vivian is fueled by her family, friends, mentors, and cake.