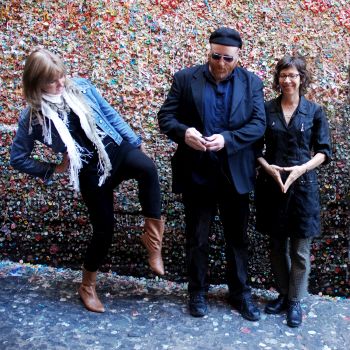 Seattle super-harmonizers UNCLE BONSAI are the Tim Burtons of folk music – dark and hilarious, but with moments of great insight and beauty. With three strong voices and a guitar, Bonsai presents an often dizzying vocal relay of intricate harmony. The trio aligns itself with the underachiever, the dejected, the outsider. Their densely-packed lyrics fly by in a whirr at times, and take a skewed stance on topics such as first-world problems, jobs for America, the creation of the universe, the afterlife, and, whoa!, holidays with family. A little like Stephen Sondheim linking arms with Tom Lehrer with harmonies by the Beatles. Or like Zappa in therapy with Peter, Paul and Mary. Uncle Bonsai’s releases since the turn of the 21st century include The Grim Parade (2010); a bedtime book/CD for grown-ups, “Monsters in the Closet” / “Go to Sleep”’  — two tauntingly twisted tales for tormented parents (2013); and (2017)  The Family Feast: The Study of the Human Condition, First World Problems, and the Lasting Physiological and Psychological Effects of Eating Our Young, which features Brand New World, Modern Medicine (Old Man Arms), In The End, The Family Feast, and Bat.  An Associated Press story said “The group has achieved an almost cult status…their music ranges from irreverent to ironic, from satirical to sad. And despite the folk tag, their music defies categorization […]” We are thrilled to have them at the 2023 Moisture Festival.