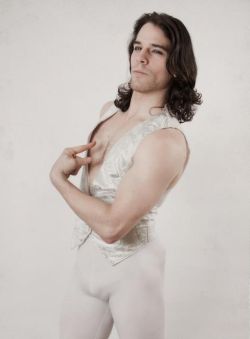 As a professional dancer, Trojan was classically trained in Ballet and Modern dance and has been performing dance professionally for seven years. In a fun twist of events, Trojan discovered Burlesque through his brother, Paris, who in turn had discovered it from The Luminous Pariah. Trojan’s first striptease was for a good friend’s bachelorette party, for which he and Paris created their first burlesque act: Swan Tease. The duet was such a hit that they got asked to do it again at the reception and he’s been performing Burlesque ever since.

Trojan is half of the dynamic dance duo, The Original Twins, which also stars his twin, Trojan Original. The twins’ choreography has been featured in 12 Minutes Max, a choreography showcase at On the Boards, and as the opening act of a vaudeville show.

In 2010, Trojan co-founded the Boylesque troupe Mod Carousel along with the Luminous Pariah and Paris Original. Since its inception, Mod Carousel has self produced shows in Seattle, toured annually to Alaska and was featured in the first ever annual New York City Boylesque Festival. Mod Carousel has also toured Internationally, most notably at the BrickHouse in London.