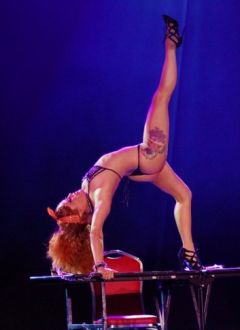 Trixie Little is the Reigning Queen of Burlesque, Miss Exotic World 2015 and New York City’s pint-size powerhouse! Trixie also has the alternative title “Queen of No Fucks” because she brings a sense of rebellion and independence to the world that only fierce, bold, feminist women can! BAD ASS WOMEN OF THE WORLD, UNITE!!!
Seamlessly blending circus, theater, visual arts and burlesque training, Trixie presents a raw feminine power that is both hilarious and imaginative. For over a decade, she has pioneered her own style of circus-cabaret, touring frequently in America, Australia and Europe. Co-star of the feature length documentary film that followed 7 years of her life, titled “Us Naked,” the film won Best Documentary feature in 2015 at the DocFeed and Coney Island film festivals. Other career highlights include Best Burlesque Duo, Most Innovative awards (Burlesque Hall of Fame), appearance on France’s Got Talent, a residency at an Off-Broadway theater in NYC (Ars Nova) and regular bookings at NYC’s most infamous nightclub, The Box. Trixie received her circus training at the New England Center for Circus Arts in Vermont, studying partner acrobatics and duo trapeze. Before she was Trixie Little, Beatrix Burneston founded the synchronized swimming and roller skating non-profit arts troupe, Fluid Movement. She was awarded an Open Society Institute Fellowship, funding her community arts organizing work in Baltimore City for 18 months. And even before all of that…Trixie graduated with a degree in Visual Arts and Painting.