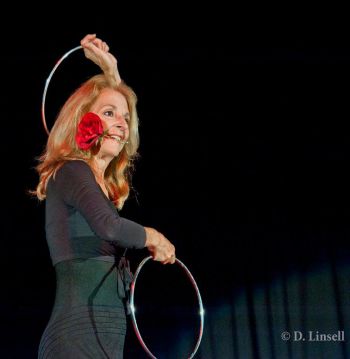 Tina Lenert was born in Caracas, Venezuela. At age twelve she moved with her family to Malibu, California and took an interest in performing, first by playing electric guitar in an all-girl rock band and then switching to classical guitar, in which she majored in college.

A visit to the Renaissance Faire and seeing Robert Shields inspired her to give up music and become a mime, and she with four others formed the LA Mime Company. A visit to the Magic Castle in Hollywood prompted her to combine Mime with Magic. Through that she has developed several acts which have given her the opportunity to perform worldwide including the Wintergarten in Berlin, London Palladium and Princess Grace Theatre in Monte Carlo. More recently she has returned to music via the harp and ukulele. She and her husband, comedy magician and magic historian, Mike Caveney, live in a craftsman style house in Pasadena, California.