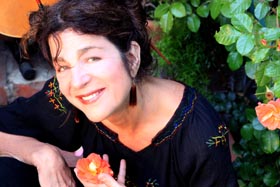 Teresa Tudury is an absolute original. From her San Francisco roots to the Greek Islands to New York and LA where she performs her music and/or as a comedian, she has a loyal following. One paper described her this way: “Part chanteuse, part comedian, part bona fide pop artist…and a voice that could stop a war.” —Buzz Weekly. We’ve tried for a few years to have her with us at the Moisture Festival and now it looks like 2013 is the year — or the first year — and we couldn’t be happier.