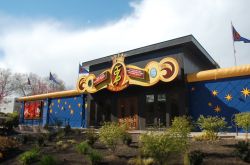 Teatro ZinZanni’s main event is part circus, part cabaret, and always magical. Described as “the Kit Kat Klub on acid” Teatro ZinZanni is a night out unlike any other. It is a three-hour whirlwind of international cirque, comedy and cabaret artists all served up with a scrumptious multi-course feast and elegant libations. The ever-evolving and constantly changing production— at least three new shows per year — combines improv comedy, vaudeville revue, music, dance, cirque, and sensuality into a dizzying and colorful new form that is never quite the same from evening to evening. Famous for its intimate setting, the fast-paced action of the show unfolds above, around and even alongside you as you dine on a gourmet meal. Don’t miss the show The New York Times calls “the hottest ticket in town”!