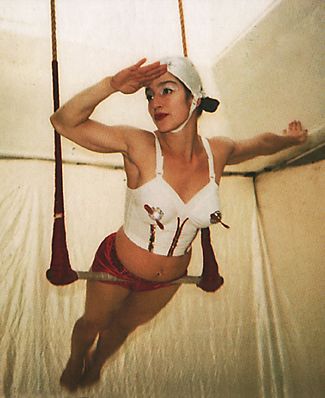 Tanya Gagné’s interest in the trapeze all started in a barn in Washington state while she was house-sitting for the Flying Karamazov Brothers. She then quite literally traveled the seven seas, working for two and a half years as a rigger and deck hand aboard two- and three-mated Baltic trading ships.
Initially self-taught in the circus arts, she began her official training with Irina Gold in NYC. She then traveled far and wide to train, including stints at London’s Circus Space, and studying with Jean Palacy in France and Master Lu Yi at the Circus School of the Arts in San Francisco.
During this time, she also performed solo trapeze around the United States and abroad with several companies, including The Bindlestiff Family Circus, Circus Amok, and the all-women dance/circus troupe, LAVA, of which she was a co-founder.
Tanya’s own dance/theater works have been produced in New York City at PS 122, Judson Memorial Church’s Movement Research Series, La MaMa Theater, the Puffin Room, and Dixon Place; as well as in Europe, with performances at Kunstler Haus in Vienna and the Potsdam Theater in Berlin.
Most recently, her signature solo act, a “drag striptease on the trapeze,” was featured in La Clique at the Famous Spiegeltent in New York City