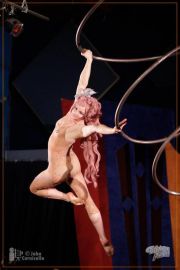 Tanya (Tova de Luna) has been an influential part of the Seattle circus scene for over 12 years, after having trained most of her life at the nation’s top ballet schools including School of American Ballet (NYC), San Francisco Ballet School, and Pacific Northwest Ballet, for which she moved to Seattle on scholarship at 16. Her ballet training influences her signature smooth, dynamic, and dramatic style, for which she has won over many critics in town. In her aerial career, she has toured in Ireland and New Zealand, instructed the circus staff at Club Med resorts in exotic locales, and has passed auditions for Cirque du Soleil, Dragone Productions, and Cavalia, and is the inventor of the aerial spiral.  Part of the burlesque scene for the past few years, she is a member of The Atomic Bombshells, appears with Verlaine/McCann Productions in the annual spectacle “The Land of the Sweets”, and competed at the Burlesque Hall of Fame Weekend (2015) for Best Debut on tiny hoop.  She has hung 100’ off of a crane over the Duwamish River in a collaborative art performance piece, and has trained many of the new aerial performers in the Seattle circus scene.  She appears at events for corporate clients such as Microsoft and Google regularly, is a resident aerialist at USC Events, and holds weekly residencies at The Pink Door and Suite nightclub.  She has worked with local groups The Acrobatic Conundrum, The Aerialistas, Animate Objects, and Q Nightclub.  You can find her on Instagram @tanyabrno.