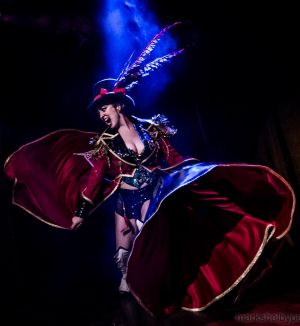 Commonly described as “The Elizabeth Taylor of Burlesque,” this vintage vixen teases with both humor and a sophisticated sensuality. A staple on the New York City burlesque stages, Tansy radiates a joyous effervescence whilst channeling the sublime glamour of another era. She is admired for her classic energy, storytelling, and joie de vivre. This year, Tansy had the honor of performing at The Berlin Burlesque Festival and the Movers, Shakers, and Innovators Showcase at The Burlesque Hall of Fame in Las Vegas. In 2012, she was crowned “Miss Newcomer World ” at The World Burlesque Games in London, England, and performed in the “Best Debut” category at The Burlesque Hall of Fame. Tansy also had the honor of competing for the “Queen of Burlesque” title in New Orleans. Of her accomplishments, Tansy is most thrilled to have been the star/co-creator of the Off-Broadway hit, Eager To Lose, at Ars Nova.