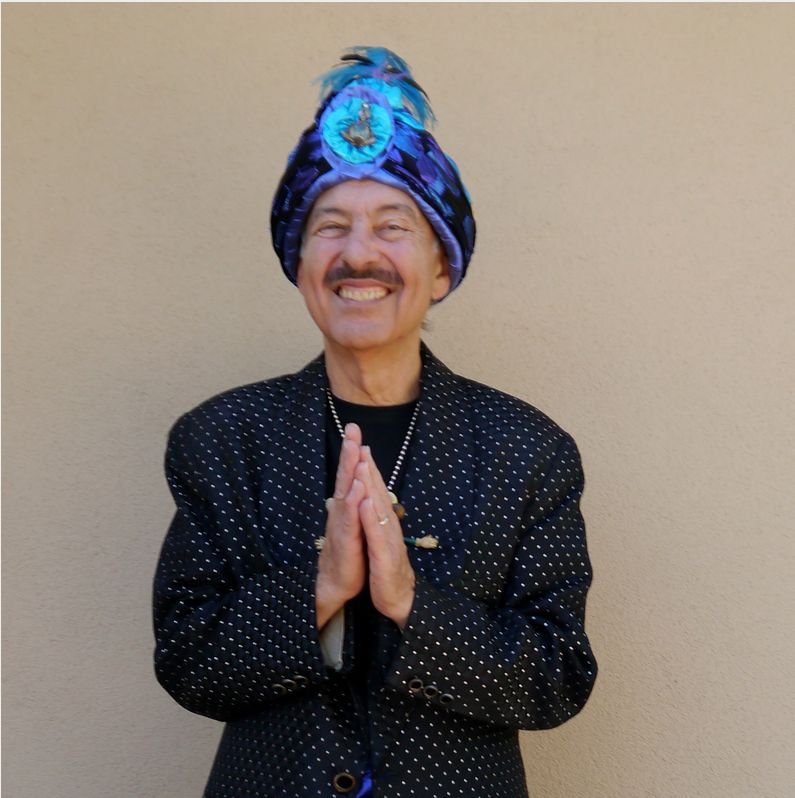 Swami Beyondananda is the cosmic comic alter ego of writer, humorist, performer and uncommontator Steve Bhaerman. The Swami, whose favorite yoga pose is tongue-in-cheek, is the spokesperson for a new non-religion, FUNdamentalism (accent on “fun”). Says the Swami, “We are strictly non-dominational.” Steve was pursuing a career as a teacher and writer, when a funny thing happened. The name “Swami Beyondananda” flew into his head one day in 1979. As Steve tells it, “I got struck by enlightening during a brainstorm.”

The following year, when he and a cohort were casting about for a comic mascot for their groundbreaking holistic publication, Pathways in Ann Arbor, Michigan, Swami’s name popped back up. The first issue of Pathways in January 1980 featured an ad spoofing the old Famous Artists ads. This ad was for Famous Guru’s Schools, and the headline proclaimed, “We’re looking for people who want to draw … on higher consciousness.” The piece included some mock testimonials, including: “Dear Swami … loved your leadership training … please send followers.” Before long, Swami was the most popular feature in Pathways, as he held forth on topics such as “Everything You Always Wanted to Know About Sects” (“… unbridled sects can lead to unwanted misconceptions …”), Teach Your Dog to Heal (“… being around friendly canines generates healthy hormones called puptides …”), Tantrum Yoga (“… the latest rage on the path to ire consciousness”), and Be There Now, Swami’s ultimate take on bi-location (“… the first time I stepped outside my body, I was beside myself with excitement …”).

After Pathways ceased publication, the Swami’s articles began to appear in national publications such as the old East West Journal, and local publications in Philadelphia, Austin, Salt Lake City, among others. When Steve decided to pursue comedy as a full-time career in 1985, the Swami was the obvious vehicle. (You can read the surprising story of the first words that ever came out of Swami’s mouth in the e-book, Wake Up Laughing: An Insider’s Guide to the Cosmic Comedy.) Anyway, shortly after his first public performance as Swami in 1985, Steve met his wife-to-be Trudy, and a year-and-a-half later, they took off in a van and trailer and launched the Swami and Trudy show. And the rest … is mystery. In the course of nearly twenty-five years of purveying cosmic comedy and healing laughter, Swami has had a successful, long-running monthly column, Ask The Swami, has written four books (Driving Your Own Karma … When You See A Sacred Cow, Milk It for All It’s Worth … Duck Soup for the Soul … Swami for Precedent: A Seven-Step Plan to Heal the Body Politic and Cure Electile Dysfunction), and produced a half a dozen comedy cassettes (sorry, not available on 8-track) and CDs. He has been on stage with the great sages of the past quarter century, and even performed for Swami Satchidananda’s 80th birthday party in 1994, along with Hollywood celebs and international recording artists. He has gained a reputation for being both pointed and compassionate (his comedy has been called “irreverently uplifting”), and over the past decade, his comedy has become more political. (“I know,” Swami says, “that many people don’t want to go there. But there has already come here.”) In recent years, the Swami has performed at numerous political events, including the Transpartisan Alliance Citizens Summit, the Network of Spiritual Progressives Conference, the Department of Peace Conference, the Praxis Peace Institute Economics of Peace Conference, to name a few. Swami and his slightly-more-serious alter ego Steve Bhaerman have launched a weekly radio show on Om Times Radio, Wiki Politiki.