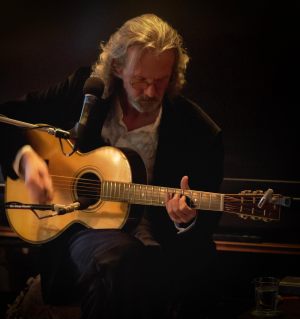 Stevie Coyle’s dear Granny was a pianist in the heyday of vaudeville, his mother played in mandolin orchestras during the 1930s and his father ran a radio station in southern California and brought home all the promo LPs that didn’t fit the Spanish-language format. Not so surprising then that he turned his attention to music and theater. Inspired by his first Hot Tuna album he played music and then he secured degrees in Theatre and Theology. Stevie followed that with 3 years on the road with The Royal Lichtenstein Circus. With his good pal Roy Zimmerman they formed The Foremen and comedy duo The Reagan Bros. in Los Angeles, and while there, Stevie appeared on Cheers and in many television commercials and had a regular role on The Young And The Restless.

In 1999 he co-founded and fronted the whiz-bang string band The Waybacks and toured steadily with them from 2001 through 2007. Stevie now owns and runs a high-end acoustic guitar boutique in the San Francisco Bay area called Mighty Fine Guitars, and plays music with The Quitters Trio, as well as with San Francisco’s Hellman family, who each year sponsor the colossal Hardly Strictly Bluegrass festival in Golden Gate Park. We’re happy to have had this grandson of vaudeville get wet with Seattle’s Moisture Festival more than once now.