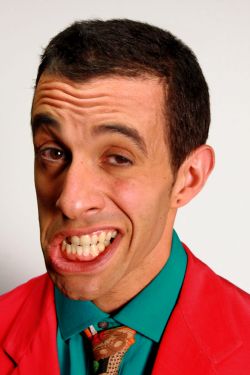 Producer, managing director and comedy host Stefano Iaboni is an international actor/performer/director and teacher born and raised in Rome … yes, that Rome. He moved to the Netherlands and enrolled in a circus school but found neither the weather, the food nor the school agreeable so he moved on to Spain. He must have found things he liked there because he spent the next 10 years in Barcelona working for theater companies, acting in movies and commercials, participating in street festivals around the world and starting his own sketch comedy cabaret. Stefano and friends utilized a hidden camera format and his character SuperBello Man, a super-hero character he’d created, starred in episodes of a series that were distributed online.

Stefano Iaboni currently lives in Portland with his wife and business partner, Deanna, and their two daughters Olivia 7 and Mila 2.

He offers nouveau clown workshops in Portland, corporate team building workshops and laughter-therapy classes when not touring the globe with his solo show “S.P.A.M.