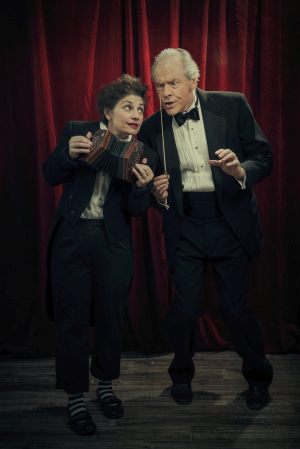 Dick Monday and Tiffany Riley have been partners for 20 years. In that time, they have trained all the clowns for the Greatest Show on Earth, created the clown troupe The New York Goofs and Slappy’s Playhouse in Dallas. They have also collaborated with Children’s Medical Center to develop Funnyatrics, the pre-eminent Medical Clown Program in the Southwest. Dick has extensive film and televsion credits, including Woody Allen’s Sweet and Lowdown, My Life, Brain Donors, Saved by the Bell and appearances on the Tonight Show and David Letterman. Clown duo Slappy and Monday have been featured in circuses worldwide including The Big Apple Circus and Circo Atayde, and are the resident clowns for The Lone Star Circus, which is based in Dallas. Through their non-profit organization, Foundation for Laughter, they have presented science and math shows to tens of thousands of school children in the North Texas area. In 2015, they re-created their Off-Off Broadway show, “Hopped up on Goofballs Cabaret” which presents a new show each month at the Pocket Sandwich Theatre in Dallas. They are thrilled to be part of the Moisture Festival.