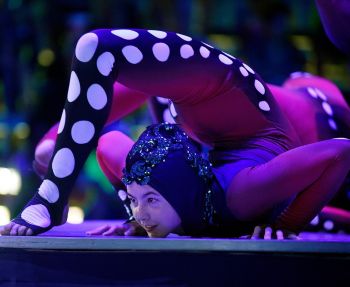 Saffi has performed in a number of family shows at Teatro Zinzanni where she was a featured contortionist, a hoop and fabric aerialist and was shot out of a cannon (no, really 😉
Saffi Watson first performed in the Moisture Festival at the age of 6 with the Amazing Circus 1-ders of the School of Acrobatics and New Circus Arts (SANCA). She has since appeared at the Festival performing contortion, handbalance and aerial hoop, and has shared the stage with clown Godfrey Daniels and the Toy-Box Trio.
Last summer, Saffi performed on the Circus Smirkus 30th anniversary Big Top Tour of New England, and is excited to be on the Smirkus tour again this summer!
She will join Saan Popovic in partner aerial performances at this year’s Moisture Festvial under the name Duo Sapphire.  We are so glad to have them with us in 2018!