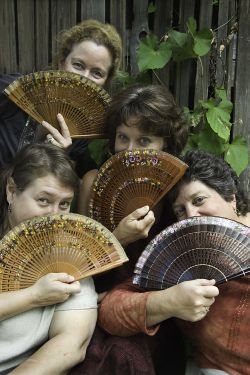 The Righteous Mothers are four funny, philosophical female folk-rock musicians who have been one of the Northwest’s foremost musical performing groups for the past 31 years. They whip their audience into a frenzy with zany original music, witty theatrics, and mind-boggling, intricate vocal harmonies. The Righteous Mothers grab hearts and funny bones with songs about ice cream, labor pains, annoying dreams and Supreme Court decisions. They surprise and delight young and old, gay and straight, male and female with their quirky humor and open hearts.

They have won a variety of awards most interesting of which is the Seattle Area’s Deaf and Hard of Hearing Community’s favorite musical band This was awarded to them, in part, due to The Righteous Mother’s highly animated and expressive performances.

To date, they have released seven recordings: The Righteous Mothers, Stand Up, All the Rage: and none of the calories, Pesky Angels, A Million Things, Best of the Righteous Mothers: The First 25 Years, and the newest CD called Dream On which contains their tribute to Molly Ivins and tells of their intent to “fight for truth and justice and have fun.” Sounds like Moisture Festival music to me …