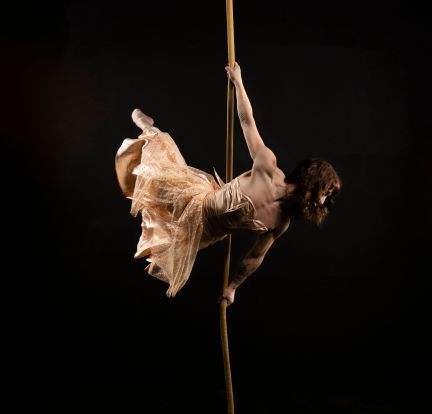 PJ Perry is a corde lisse specialist from Bellingham, Washington, who has been in the air since 2008. Her works have included solo, duo, and larger group pieces that have taken her around the globe. In addition to being involved in recurring local shows and special events like Moisture Festival, she has completed contracts with Circus Monti in Switzerland, Friedrichsbau Varieté in Germany, Venardos Circus in the states, and Acrobatic Conundrum here in Seattle. Festival work has even taken her to the outer edges of the universe with performances at the Western Australia Circus Festival  and Russian Circus Princess Festival in Saratov, Russia.  Her current projects focus on solo rope and duo synchronized rope with her partner, Eve Diamond in their project, Girls Gone Rope, which is slated to head to the Bulgarian Circus Golden Horse festival this autumn.  PJ continues to work year round with the illustrious Bellingham Circus Guild. You can follow PJ on the social  @pj_perryalist and @girls_gone_rope