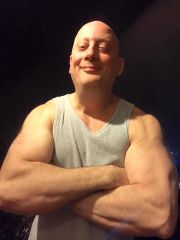 When teaching clown classes Peter Pitofsky advises his students to respond to their childish impulses “No judgment. And don’t be nervous, not around me. There’ll never be a bigger moron in the room than me.” Yet, somehow, this moron has been a featured performer on stage with Teatro ZinZanni, on television’s Tonight Show, on television and Varieté theater stages all across Europe and on Hollywood’s big screen. He is the same lovable fool onstage and off and we couldn’t be happier that he is going to fall down hard on a Moisture Festival stage in 2018.