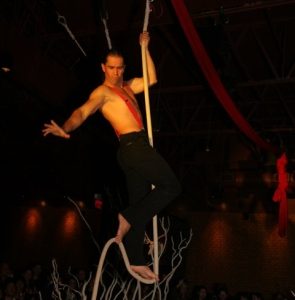 PAZ has been performing and teaching the circus arts for over seventeen years. His performances have taken him to Asia, Australia, Central and North America, Europe, and the Caribbean and have included solo, duo, and group acts on the ground and in the air. PAZ has experience working in major motion pictures, television, festivals, and of course on the live stage. He is also co-founder of Equilibrium Circus – an award winning duo that performs around the globe. Currently based out of Vancouver, BC, PAZ enjoys teaching circus to local children in his time off.

This will be PAZ’s second year at the Moisture Festival and he is very excited to be performing a solo corde lisse number for the Seattle audience.