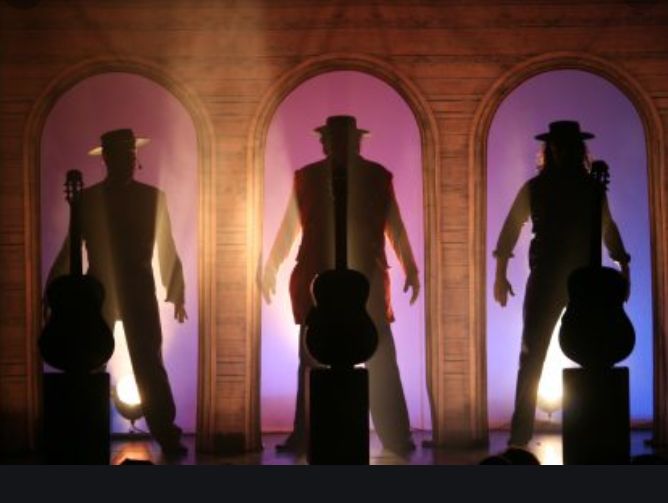 They play their guitars like “Paco De Lucia”
They sing like “Pavarotti” and rumba like “Gypsy Kings”.
They Spin, Flip, and Fly their Flamenco Guitarras, while popping ping pong balls, and smashing eggs and cliches.

Paul Morocco developed ‘Olé!’ after cutting his performing teeth on the streets of New Orleans. There, he explored his love for entertaining the public; learning the timeless craft of connecting to the audience, and developing his unique improvisational skills.

The original ‘Olé!’ show began at London’s Mime Festival in 1990, and debuted at Edinburgh’s Fringe Festival in 1991, receiving not one, but two awards for the performance.

Beginning in 1996, Paul has teamed up with brilliant musicians and comedy partners and that version of the show plays to enraptured audiences to this day, and has become an international cult hit all over the World.

“These three Locos are not only funny, but enormously musically talented as well. Their powerful performance combines frantic and zany slapstick that is almost surreal beyond madness.”                        – The Daily Telegraph, UK