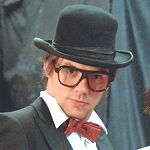 As a young man Moeppi (a German nickname for Myron) left his home in Muenster, Germany to join his father in the family craft … making people laugh. Moeppi’s father, Hacki Ginda (see his bio on this page) was famous in Berlin for his onstage work and for the fact that he owned the well known Chamaeleon Varietè Theater. Moeppi immediately plugged in, working backstage and stepping on stage at every opportunity. He hadn’t yet developed the skills that he now shows but he was, from the beginning, fearless. Hacki was (is) noted for his ability and willingness to improvise and otherwise create chaos for those working with him onstage. With no more direction than “Follow me” Moeppi stepped out night after night and found his character in front of delighted audiences. Moeppi performed last year at the Mositure Festival without his dad but he looks forward to this year’s collaboration. By the way, his son, Diemo, now 3 1/2 years old is already a stage veteran. This won’t be the end of Ginda fun on stage at Moisture Fest and other new world venues as well as those in Muenster and other parts of the old world.