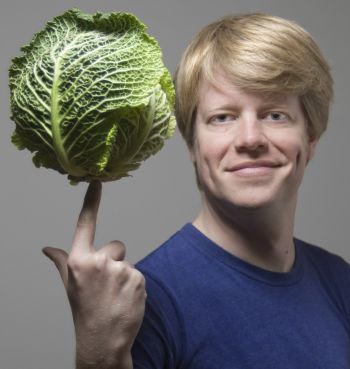 Combining two of Canada’s main exports, comedy and natural resources, Mike Wood is a comedian with a degree in mine engineering.

He has been making people laugh for money since 1994. From 1996 to 2003, comedy put food on the table and paid for an engineering degree. Mike Wood’s comedy and engineering careers are now themselves part of a clever balancing act that may someday pave the way for home ownership.

Starting out as a street performer at outdoor festivals in Canada, Mike developed a slick outdoor stunt comedy show, and has since moved to indoor stages all over the world. He is a successful stand-up comedian, MC/host and actor, but it is Mike Wood’s “Catapulted Cabbage Catch” that has taken him around the world. From Toronto to Singapore, Dublin to Christchurch, Bruges to Barcelona, Mike has performed in every province of Canada and 13 different countries.

Mike’s comedy is dry but affable, wry but off-beat. His smart sense of humour is informed by years of pop culture immersion and a love of language. He demands little of his audience except their attention and a willingness to connect a few dots.