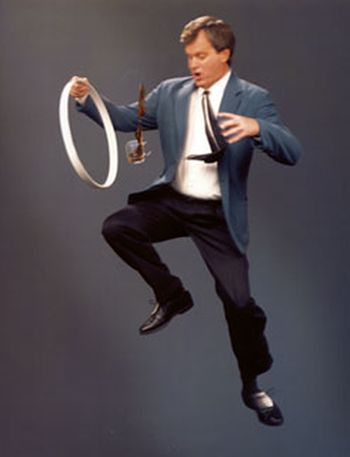 Mike Caveney has performed professionally for over forty years and each of his original routines is perfectly suited to his dry comedic wit. He is a member of the most prestigious group of magicians in the world, The Inner Magic Circle of London, England. He was voted STAGE MAGICIAN OF THE YEAR by the members of Hollywood’s Magic Castle. Mike’s talents have taken him from Japan to Russia, from Monte Carlo to Borneo, Australia, China, throughout Europe and most of the 50 States. Mike has performed on the legendary Orient Express, at the World Congress of Magic in China and Japan, the Sydney Arts Festival in Australia, the world famous London Palladium and was featured on A&E’s Story of Magic and NBC’s The World’s Greatest Magic special.

Mike Caveney is a comic performer, a master magician, a magic historian and a publisher of books on magic.  It’s the on-stage Mike Caveney that Moisture Festival will share with our Seattle audiences but the thing is … he’s a lot like the backstage Mike and we’re all in for a treat.

After reading that bio, it might not surprise you to hear that Mike is married to a professional magician as well. Tina Lenert and Mike Caveney have come to us from their home in Pasadena, California.