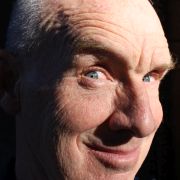 A third-generation San Franciscan, Michael’s creative efforts began early. In high school, he was a published poet and won the school acting award. In the early ‘70’s, Michael was intrigued with the art of clowning, and was handpicked from over 2,000 applicants to attend Clown College. Upon graduation, he landed a job as a clown with the Ringling Brothers Circus. After several years of circus life on the road, he returned to San Francisco and began to create his act. He was only on the streets for three years but he is remembered there today as one of the greats. He influenced many who followed. It was no surprise to the other performers when he moved on to clubs and then New York’s Broadway hit ‘Sugar Babies’ with Mickey Rooney and Ann Miller. Soon his notices brought him to the attention of Saturday Night Live’s producers, resulting in six guest appearances on the show, the Tonight Show with Johnny Carson (2 appearances), The Smothers Brothers (second) Show and a slew of others in the US and abroad. Citing Jack Benny, Fred Allen, and Charlie Chaplin as his greatest comedic influences, Michael best appreciates humor that he can perform for any audience, a type of “new vaudeville.” “I love it when I do a show and there are kids and grandparents laughing at the same joke,” he says, “It is a type of humor that doesn’t age.” Though Seattle audiences might have seen him in Teatro Zinzanni as Chef Tad Overdone, somehow, he hadn’t yet made it to the Moisture Festival where many of his friends eagerly await the chance for our audiences here to see this act and the chance to meet this man. 2015 is the year.