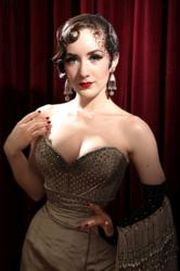 Described by the New York Times as “pure sexy”, Medianoche has been a staple in the New York City burlesque scene since 2008. Born and raised in southern Spain, she brings strong traces of tango and flamenco dance to her unique flavor of tease.

Medianoche was Awarded First Runner-Up at the Burlesque Hall of Fame in Las Vegas in 2014. She has also been crowned Queen of Burlesque in New Orleans, won the coveted Crystal Corset Award in the Pennsylvania Burlesque Festival, and was featured for three years running in 21st Century Burlesque‘s list of Top 50 Burlesque Performers worldwide. Medianoche has also been featured in The New York Burlesque Festival – where she was awarded a Golden Pastie for her “alluring gaze”. A member of Dita von Teese’s Strip Strip Hooray! cast, Medianoche has dazzled Canada with the World Famous Pontani Sisters; and charmed audiences as far away as St. Petersburg, Russia.

Aptly dubbed “Sin in an Hourglass”, Medianoche is a regular performer with Wasabassco, and often graces stages as varied and prestigious as those of Duane Park, Morningside Castle, Galapagos Art Space, Highline Ballroom, and the House of Blues.