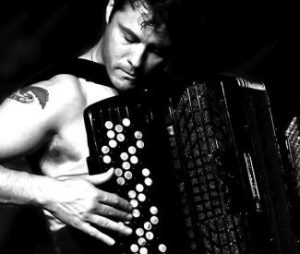 Mark Growden is a singer, writer, multi-instrumentalist, composer, record producer, visual artist, and workshop leader. Mark has released several critically acclaimed albums, including Saint Judas, which was awarded “2010 Rekkid of the Year” by music blog Stash Dauber and ranked in the 2010 Village Voice Critics Poll. Growden has toured the US extensively, composed original musical scores for a number of dance and theater companies and scored several films. In an interview at the time of the release of his album Lose Me in the Sand, Mark said “I grew up in an old logging town, less than a hundred people, on the Sierra Nevada/Cascade Divide …” Those rural mountain roots are ever present as Mark has explored new and different directions to take his music and his art. One reviewer described his delivery as “direct – powerful and precise as a street fighter” and yet his theatricality has led him to be compared to Tom Waits, Van Morrison, Old Red and Bertolt Brecht. That same sense of theater has brought him into the company of the New Old Time Chautauqua and, at this festival, the aerialist Shannon Grey. We’re so glad to have him with us. In addition to the shows that are listed on this page for Mark’s solo performance, he will join aerialist Shannon Gray in performances at Hales on April 11, 12, 13 & 14. Look for the listing of “Shannon Gray and Mark Growden” for details.