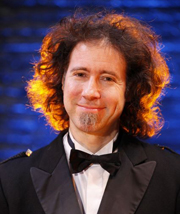 Comprehensivist, composer and performer Mark Ettinger plays with music in a variety of genres on an assortment of instruments, from joining Bo Diddley as pianist to conducting the Cincinnati Orchestra at Carnegie Hall, with many stops in between.

He is a juggler who performed for many years with the Flying Karamazov Brothers while acting as their musical director. Mark composed music for five of their internationally touring shows. He conducted and had original works performed by numerous orchestras, including the National Symphony Orchestra, the St. Louis Symphony, the Seattle Symphony, among others. His first operetta, The Triangle, a romance setting of Yeats poems, premiered in the spring of 2005 in NYC. He composed the score to the critically acclaimed show Coming, Aphrodite, produced in NY at La Mama Etc. in February 2009.

Mark released his first album of original songs, In This World, in 2006, and his second, Songbirds of Tralfamador, is now available in a limited edition pre-release unplugged version. Get ‘em while they’re hot; they’re selling like pancakes.