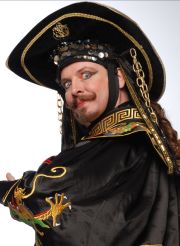 …You’ll be “Wowed” by the
Magical World of Michael Stroud, aka Majinga the Magician. Michael is a best-selling magic author, a twelve-time award winning magician and performance artist, and has been featured on multiple radio and television shows around the country. His best-selling “Book of Magic” by Klutz press (1994) has sold 2 million copies. He has appeared on a PBS Bill Moyer’s special, on NBC, throughout Las Vegas, and on The Science Channel.
Performing to date in 13 countries, his theatrical show “The Magique Bazaar” is the longest-running public magic show in the San Francisco Bay Area (since 1998).

In 2005, while on a lecture tour to magic clubs throughout China and Indonesia, he saw a performance of “bian lian” or “change of face”. Originating from the Sichuan Opera over 300 years ago, this art form fascinated Michael so much he put several years of practice and research into it, culminating in an original character and act called “Lian Qi Bian”. Seen on NBC and at the Magic Castle in Hollywood, he is the first caucasian master to perform this art and combine it with his own style of magic illusion.
And now, for a change of face, enjoy Majinga the Magician, and the Magical Chinese Masks!