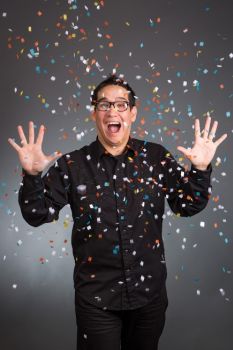 Louie Foxx celebrated his interest in childish pursuits even before the birth of his child gave him “… a valid excuse to go to the zoo once a week and build forts out of the sofa cushions.” He spent much of his childhood developing skills that his teachers told him were a waste of time. Louie got his start as a kid performing his show on a corner downtown and he’s come a long way since then. Louie is now a two time Guinness World Record holder and has been on America’s Got Talent, the nationally syndicated television show How ‘Bout That, Evening Magazine, New Day Northwest, Otra Movida TV in Spain, and in London’s Guardian Newspaper! … and now he can add Moisture’s Burlesque to his list of credits