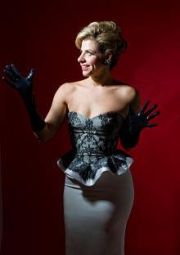 Lady Rizo aka Amelia Zirin-Brown is a NYC based cabaret star, composer, actor and performance artist. She is also a Grammy winner for her 2010 collaboration with Yo-Yo Ma on the Holiday album Songs of Joy and Peace. Received with critical raves three years in a row at the Assembly Festival in Edinburgh, she won the inaugural Time Out London and Soho Theatre Award, and the 2013 London Cabaret Award. A recipient of the New York Foundation for the Arts fellowship, her original pieces have shown at Joe’s Pub at the Public Theatre in New York (where she was a resident artist for 3 years) Leister Square Theatre in London, and the Sydney Festival (nominee for a 2013 Helpmann award). Her debut album is entitled Violet and available at www.ladyrizo.com