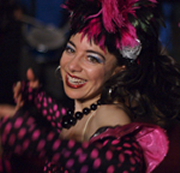 Reigning Carnaval SF Queen Kellita descends from a long line of sassy dancers. Her Spanish grandmother routinely danced flamenco on tabletops while her Lebanese aunt entertained vaudeville audiences as The Chocolate Princess with her signature hula striptease dance. Kellita continues the tradition of interpreting ethnic dance through a showgirl lense. While classically trained, it was her introduction to samba, cabaret and burlesque that opened her floodgates of enthusiasm.

When not directing her beloved dance troupe, Hot Pink Feathers, Kellita delights audiences with her captivating solo acts. She has ventured a la carte to grace stages from Hollywood to the Big Apple and from Alaska to Costa Rica, leaving glitter and grins in her wake. Kellita was named Little Miss Aftershock (a title she shares with Miss Indigo Blue!) for her outstanding shimmy-shake at the Miss Exotic World Contest and earned a nod to her main instrument of bump n’ grind at the New York Burlesque Festival with a Golden Pastie for Best Derriere.

Kellita’s choreography won First Place in Original World Dance in Carnaval San Francisco 2005 and 2006, and Hot Pink Feathers are winners of the San Francisco Bay Guardian’s “BEST OF THE BAY 2008”. Kellita is delighted to share the love of samba burlesque and world cabaret dance technique and choreography with students far and wide through the Hot Pink Feathers Showgirl Academy, based in San Francisco, offering mobile classes and workshops wherever she is called!