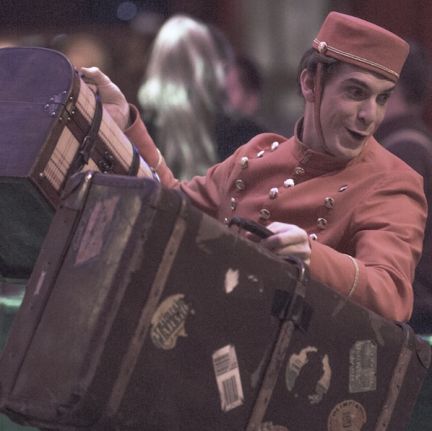 As a much-loved theater clown performing worldwide, Joel Baker brings to the stage a unique style of physical comedy, acrobatics, and improvisation. He is a graduate of San Francisco’s Clown Conservatory and the San Francisco Circus Center, where he began incorporating acrobatics, handstands, and chair balancing into physical comedy. Now regarded as one of the best comedic animators for festivals, cabarets, theaters, and corporate events, Joel launched his career as an acrobatic clown in San Francisco’s legendary New Pickle Circus. For seven years, Joel was a key performer—and additionally served as an Artistic Coach—in the award-winning Cirque du Soleil show The Beatles’ LOVE on the Las Vegas Strip. Joel has also performed main clown roles in LOFT by The 7 Fingers (Les 7 Doigts de la Main) and SOAP (Chamaeleon Theatre Berlin). Currently, Joel is touring in a main clown role with Cirque Bouffon in the new circus theater production LAFOLIA. Other recent engagements include five years with PALAZZO dinner theater show GLÜCKSJÄGER in Germany and Austria as well as the lead character role in CIRKOPOLIS by Cirque Eloize. He is a three-time, returning director for Circus Bella and performed with this troupe at the Smithsonian Folklife Festival celebrating the Circus Arts on the National Mall in Washington D.C. Other directorial credits include the show ALIS in Italy’s Le Cirque World’s Top Performers and the Nevada Ballet Choreographer’s Showcase. Joel has had the honor of teaming up with Clowns Without Borders Ireland and Belgium to bring laughter to children in Europe’s refugee camps. He has appeared on the national television shows “America’s Got Talent”, “The View”, and “The Night that Changed America: A Grammy Salute to The Beatles” and has performed under the direction of James Cameron in the film Cirque du Soleil: Worlds Away.