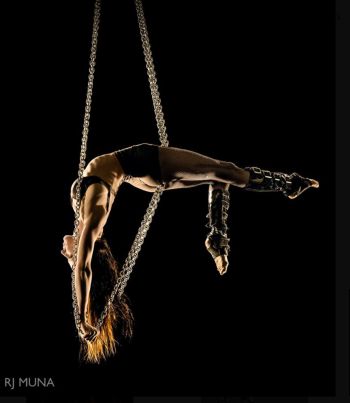 Jenny is an aerialist and performer from San Francisco, CA.  She primarily works on corde-lisse, but has also performed on tissue, hammock, and is currently in the process of creating an act on aerial chains.

Raised in a small town in central New York, Jenny was a child who always loved creating motion.  Even in the late hours of the evening when she should have been sleeping, she would be up dancing around her room, expressing her thoughts through movement. Jenny started taking dance classes at the age of 3 and by the age of 17 Jenny had studied ballet, jazz, tap, and her favorites … hip-hop and contemporary.  At that age she then discovered her love for circus and aerial arts.  Seeing her first aerial performance in Cirque du Soleil’s “Quidam”, Jenny was captivated by the magic of aerial movement and flying above the ground. She went off to college at Notre Dame de Namur University.   During her time there, Jenny studied Theatre Arts and helped to build a Dance Minor for the school and received a Deans’ Award for building it. She finished school with a Bachelor’s degree in Theatre Arts and the created Dance Minor.

Upon graduating, Jenny moved to San Francisco and began training at San Francisco Circus Center.  She was also accepted in to Acrosports City Circus and became a part of their company and training program in 2010-2011.  From there Jenny studied with coach Marina Luna on the essence and building blocks of her corde-lisse act and trained in acrobatics with coach Dominik Wyss. In 2012, Jenny worked with coach Jeremy Sheets, Lead coach of the San Francisco Circus Center Aerial Pre-Professional Program, to solidify her aerial corde-lisse act.

Jenny now has debuted her rope act at Supperclub San Francisco and has performed her rope act at Zircouplet Variete in Berlin, Germany. Jenny has also performed circus fundraising projects such as The Uncle Junior Project, and The Paper Doll Militia, as well as the prestigious fire cabaret “Heat” at the Crucible, Oakland where she performed on a silk hammock that flew over the crowds on a bridge crane.