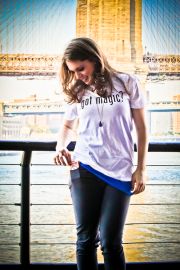 Jen Kramer is magic. She turns the impossible into the impossible-to-ignore and always does it with a smile. Jen currently headlines a regular show at the Wyndham Grand Desert Resort in Las Vegas. From the Las Vegas Strip to the Gaza Strip, she leaves adults and kids shaking their heads in amazement: “Wait! How did she do that?” Magic legend David Blaine called Jen “hugely gifted” and “poised far beyond her years.” He described her as “one of the most talented and most promising young magicians anywhere.” In 2014, Jen graduated with honors from Yale University as a Theater Studies major. A member of the Society of American Magicians and the International Brotherhood of Magicians, Jen has performed in theaters and at private events around the world in English, French, Spanish and Swahili. She is a National Merit Scholarship Winner, a National AP Scholar, and a black belt in Shotokan Karate. This is Jen’s first time at Seattle’s Moisture Festival … we’re thrilled!