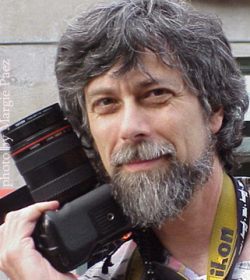 Seattle musician Jef Jaisun may now be better known for his brilliant music photography. He’s amassed an estimated half-million images, predominantly of blues, rhythm and blues and jazz artists. While he has been shooting in Seattle area clubs for 40 years, Jef expanded to cover a more national scene for the 36 years. His archives provide in-depth visual documentation of late 20th Century and early 21st Century blues history so it’s not surprising that he is now the recipient of the prestigious Keeping The Blues Alive award in Photography, presented by The Blues Foundation of Memphis, Tennessee. **************************************
But the Moisture Festival has invited Jef to bring his guitar and join the company of performers because we know his history in this field. In the 1970s and ’80s Jef put out three albums and got a lot of airplay on American radio for one of his novelty songs Friendly Neighborhood Narco Agent. He knows music and he knows fun. He’s one of ours. We don’t know what he plans for the festival but, boy are we looking forward to it.