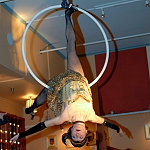 Janet McAlpin trained for two years at the School of Jacques LeCoq (Paris, France), co-founded UMO Ensemble and has been teaching, directing and performing physical theater for over 20 years.

Janet has taught clown theater at Freehold studio, Naropa Institute (Boulder, Co) and in private workshops. She has directed UMO and Circus Contraption and has performed various characters on different apparatus (Hoops, balls and stilts) at Teatro Zinzani, Cirque du Flambe, the Moisture Festival and with UMO Ensemble.

Janet loves water, gravity and her son Kai who is her new clown instructor.