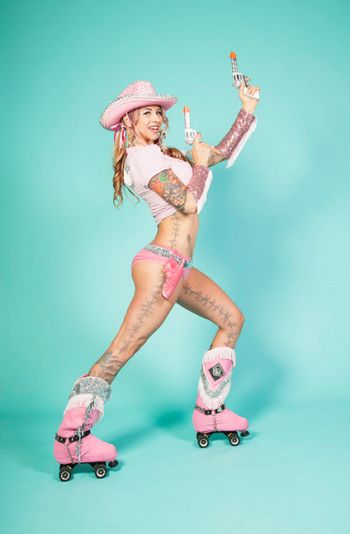 Ivizia is a Portland based entertainer who has been thrilling audiences around the world since 2001. With over 13 years of specializing in fire performance, she has also become a premiere variety entertainer and is guaranteed to ignite your fantasies. In addition to her hotter talent, Ivizia’s repertoire includes roller-skating, cube spinning, comedy and a unique puppetry performance that may just give you a “religious experience”.

She has won awards for PDX Strippies 2013 and 2014 Best Costuming and is the designer of Carnie Couture clothing since 2001.

Ivizia has worked with Vau Du Vire Society, Wanderlust Circus, Stilt Circus, Firerotica, Societas Insomnia and Garnish, and has competed in “Les Maîtres du Feu” in Canada. Featured in over 30 venues in Portland area, cities along the west coast of USA, she has performed internationally, including New Zealand, Australia, Costa Rica, Canada, England and Finland.