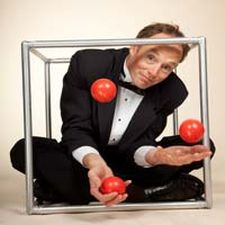 Henrik performs a “Physical Comedy Show” that spans from plate spinning a la the Ed Sullivan Show to comedy magic and juggling such as escaping a straitjacket while riding a unicycle.  He has appeared on the Tonight Show, on TV in France, Italy and China etc. etc.  Lately he was on the Gong show… twice…  and he didn’t get Gonged ;- )

Henrik’s biggest moment of fame is that he fills the first 4 out of 5 positions when you google “Plate Spinning gif”.  3.5 seconds of fame, repeated over and over again.