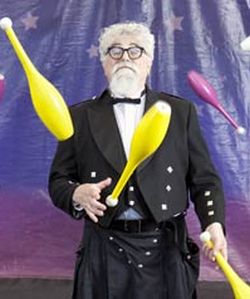 Harry Levine graduated Clark University with a BA in music and in 1984, he founded the satirical theater and musical group called Citizens Band. They toured the West and by the late ’80s Harry added work as a percussionist with a juggling troupe called The Mud Bay Jugglers. This led to a fascination with juggling and in 1995, he joined The Mud Bay Jugglers as a full time member, touring the US and Canada. It took so well that he was asked to play a part on stage with the Flying Karamazov Brothers … a job that he still does from time to time when called. Harry’s been involved with the New Old Time Chautauqua for many years and we are glad to have him as a member of the Moist family as well. 2023