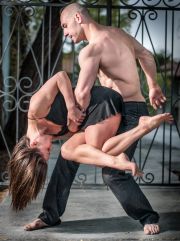 Grzegorz “Gregor” Ros, a native of Poland, came to America in 2004 with a Masters degree in Pysiotherapy and an engagement as an acrobat in the Las Vegas show Le Rêve at the Wynn Hotel. He continued his education in the health sciences in colleges in Nevada and Arizona while continuing to play a part in that popular Vegas show and providing physical therapy services at that city’s Summerlin Hospital.
*****************************************
Kelly McDonald has been performing in that same Le Rêve show since 2007. She was born and raised in Seattle. Kelly fell in love with gymnastics at the age of 5 and has pursued it passionately since. After receiving a full gymnastics scholarship to the University of Washington, she graduated with a degree in Business Administration and a Certificate in International Business Studies. Kelly has taken advantage of that study by traveling widely, including a 1 year study-abroad program where she completed a degree in Hispanic Studies from the University of Granada and she has also volunteered with Habitat for Humanity in Hungary.
******************************************
Together they have maintained an interest in causes of this sort, including appearances to benefit for the Human Rights Campaign. Their partner acrobatic numbers are noted for their beauty and passion (as I’m sure you will agree if you click on the arrow to the left and view the YouTube video). This is their first year at Moisture Festival … a real treat.