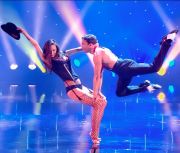 Veterans of Cirque du Soleil and Ringling Brothers, Stephan Choiniere & Lina Tabakova team up to present a new collaboration in an act called Fugazi. this performance has the spectacular choreography and balancing elements that became a favorite of Zumanity audiences where it was known, in its first form as Body2Body. Now in 1940s gangster style, coloring a contentious love affair Stephan and Lina are stunning. *****************************************
Tsvetelina “Lina” Tabakova was born in Sofia, Bulgaria where she trained in Rhythmic Gymnastics from the age of 6 to 16. She moved to the United States at age 18 and worked for Ringling Brothers and Barnum and Bailey circus as a dancer from 2003 to 2005. She chose Las Vegas as a permanent destination and began work with the Havana Night Club cast in 2006. Since then Lina has worked for entertainment agencies as a freelance performer (rhythmic gymnast, dancer, aerialist, character) including, 2nd Nature Productions, Living World Entertainment, Novelty Entertainment, AntiGravity and others. She also works as a Go Go dancer and aerialist in Las Vegas at the Foundation Room lounge and nightclub, New York New York party pit, Chateau nightclub, Marquee nightclub, and Gallery nightclub.

*****************************************
Stephan Choiniere is a phenomenon: he is a world-class acrobatic dancer and aerial artist, also accomplished as a scholarship NCAA gymnast, circus act choreographer, stunt man, and model. Translating his talents from the stage to the screen, audiences have seen him crash and burn in the movies While You Were Sleeping, Rookie of the Year, and It Runs in the Family; as Michael J. Fox’s regular stunt double on the sitcom, Spin City; in commercials for Cingular Wireless, and on television’s, Late Show with David Letterman, Late Night with Conan O’Brien, The Daily Show, and USA Up All Night. Courtesy of Zumanity, body2body has appeared in the television shows: Dennis Miller Live, MTV’s Diaries with Jennifer Alba, El Gordo Y La Flaca, and Despierta America. A modified version of the act is also featured in Cirque du Soleil’s television series, Solstrom, and Chris Rock’s film documentary, Good Hair. At Lucasfilm, for purposes of CGI, he has been the subject for motion-capture and extensive musculature anatomy reference for the Marvel feature film, The Avengers, where Stephan defined the movement for the character, Incredible Hulk. 2017*************************************