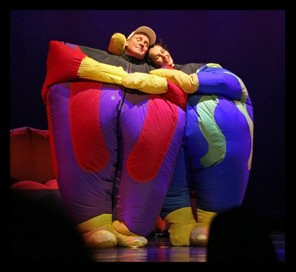 Fred Garbo and Daielma Santos will bring a taste of their Inflatable Theater Company to the Moisture Festival this year. Fred got paid for doing a card trick in 1974, and has been a professional performer ever since.

On Sesame Street, he was the acrobat inside Barkley the Dog. On Broadway, he was the chief juggler in the musical Barnum. He toured Europe, Hong Kong and Australia with the Obie Award-winning Foolsfire, with Bob Berky and Michael Moschen. He even was featured on David Letterman’s Late Night.

Daielma Santos was born in Sao Paulo, Brazil. Her training includes studies at the Royal Academy of Dance of London, Michigan University, and with director Tony Montanaro.

In Brazil, Daielma danced with Studio de Dancas and was principal ballerina with the Opera Paulista II dance company.

Her performances span the Americas and Europe, both as choreographer and performer.

From The Nutcracker to The Inflatable Living Project, Daielma’s choreography combines world-class artistry and technical brilliance with theatrical humor. Daielma became a US citizen in July of 2000 and now lives with her husband and daughter in Charlotte, NC.

We are delighted to welcome both of them to the Moisture Festival’s tenth year.