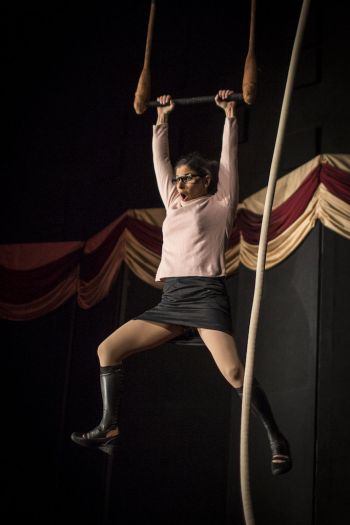 Felicity Hesed is a Clown, Aerialist, and Director.  She delights and surprises viewers with her vibrant characters, technical skill, and audience interaction.  Felicity has developed a unique style of clowning that incorporates acrobatic prowess, physical comedy, and theatrical storytelling.

Felicity discovered circus while in Chicago and proceeded to train with legendary circus families including the Flying Gaonas and the Wallendas.  Felicity combined her theater and circus training to create and direct ground-breaking theatrical circus productions, including The Tangerine Family Circus and The Tempest: A Magical Circus.

Felicity moved to San Francisco to attend the celebrated Clown Conservatory Program.  Felicity trained with world famous Circus greats including: Acrobatics with Master Lu Yi, Clowning with Jeff Raz, Trapeze with Elena Panova, and Juggling with Judy Finelli. Felicity has performed with renowned Bay Area companies including The Pickle Family Circus and Teatro ZinZanni.  She can regularly be seen performing at the Circus Center Cabaret under the direction of the illustrious Steve Smith.  Felicity was recently featured as a leading artist in her field in the San Francisco Aerial Arts Festival. This Fall, she was a special guest performer in the Tenth National Golden Chrysanthemum Competition for Acrobatics and International Humor Art Week in Kaifeng, China.