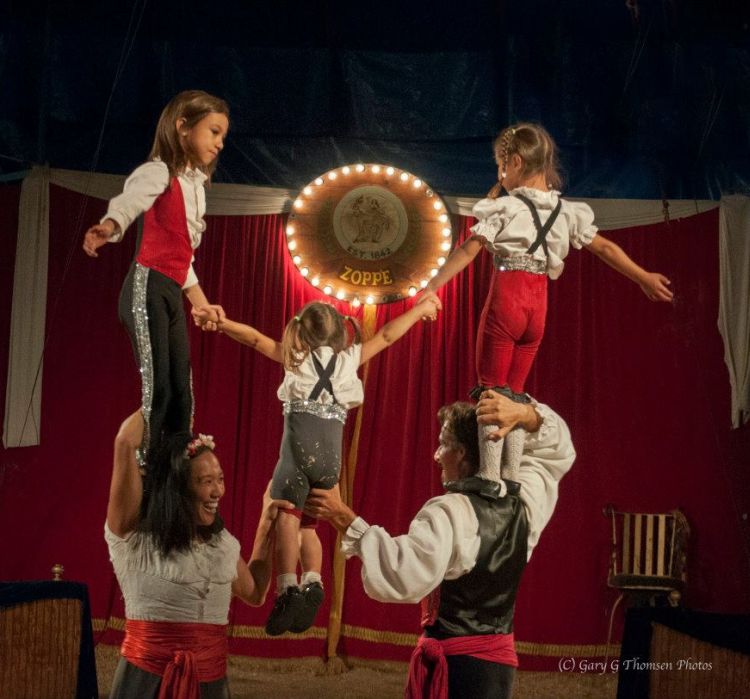 After 18 years of training and traveling the world teaching, directing, and performing circus Carlo & Orlene are now temporarily semi-long term Seattle residents and Artists-in-Residence at the School of Acrobatic and New Circus Arts (SANCA). We are so lucky to have them and their family in town while we can. Before seeking formal training, they had performed on the best (and worst) street corners of SE Asia and piazzas of Europe. Upon their return to the States, they helped found the fledgling American Youth Circus Organization. Over the years, they served as board members, festival directors and president (Orlene) of that organization. Both Carlo and Orlene are graduates of the San Francisco Circus Center’s Clown Conservatory and have trained in China where they worked to perfect their foot juggling technique. Performance highlights include tours with the Royal Lichtenstein Circus [US], Zoppé Italian Family Circus [US], Circus Monti [CH], Krystalpallast Variety [DE], San Francisco Bay Area’s Circus Bella [US], and the Flynn Creek Circus [US]. After a 2-year stint as Artistic Directors of Chicago’s CircEsteem, they incorporated their 4 kids between 1 and 10 (Giusi 2, Gioia – 6, Giulia – 9, Gianluca – 11 ) into the foot juggling act under the tutelage of Charly Castor [FR]. The Famiglia Gentile troupe will perform at the Moisture Festival using skills that go by several names in the circus world: Risley, Antipode, Icarian Games, … This involves a performer or performers juggling by use of hands and feet and thereby kicking, tossing, spinning and passing objects including cloth circles, large vases and … people! Theirs is an astounding display of coordination that will have the festival’s other jugglers coming out from the backstage to watch. 2018