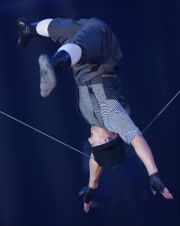 Evgeny Vasilenko is the new representative of a renowned circus family. He was born in Moscow, Russia where he attended elementary school. In 1992 he started rehearsal as a circus performer with The National Circus School of Moscow. After graduating he joined the Old Moscow Circus where he continued to improve his professional skills in a variety of dance styles and acting. He participated in various show projects and they contributed to his ideas when creating a unique act on the slack wire in 1999.
Evgeny’s distinctive act made him a Grand Prix winner of the Circus Festival in Tunis in 2000. Then just one year later, Evgeny became the winner at the Delphic Games Competition in Saratov, Russia. His success led him to multiple tours with numerous shows in Ukraine, Russia, Estonia, Germany, Holland and the United Arab Emirates. He is now lives in Las Vegas where his one-of-a-kind act can easily fit big theater shows as well as small corporate events. But in the spring of 2017 he will join us in Seattle and we could not be more pleased. 2017