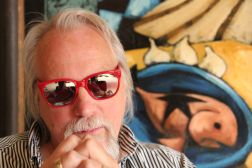 The experience of Eric Apoe is a walk through a cinematic time capsule, his lyrical masterworks chill the soul and enlighten the mind. Comparisons have ranged from Eric Burden to Bob Dylan, from Nick Cave to Johnny Mercer, but a writer with a desire to stand as an independent voice would be more appropriate. Apoe is a Seattle born songwriter and musician, with a genre blending musical aptitude that spans Jazz, Pop, Rock and Folk. Apoe spent a number of years touring with Cajun Fiddler, Doug Kershaw, developing a lifelong passion for American Roots music. As a staff writer for Chappell Music, Apoe co-wrote and worked alongside Tim Harden (If I was a Carpenter, Reason to Believe, Misty Roses), and Ron Davies, (It Ain’t Easy, recorded by David Bowie). He also gained support and encouragement from two music industry legends, Tom Dowd and John Hammond Sr. To date Apoe has released 5 CD’s with his band ‘Eric Apoe and They’ and has just completed his 6th FUNNY WORLD. In 2011he produced a Pacific North West tribute to Ron Davies, THE MYSTERY OF RON DAVIES. Currently, Apoe is writing with Saar Liven, an Israeli singer/songwriter who appears on Funny World. Eric Apoe’s years of dedication and craftsmanship are clearly hewn into his pieces, with an ever adapting style and constant refinement that speaks to the heart of a true musician and rings in the soul of the listener. With poetic force and humorous paradox, Apoe is a Leonard Cohen for the Age of Unreality. Eric Apoe performs regularly in the Seattle area. 2017