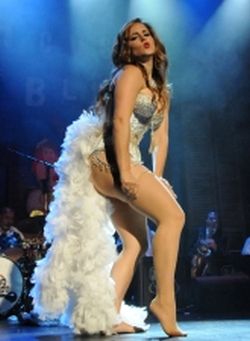 Elle Dorado was the winner of the 2014 New Orleans Burlesque Festival ‘Queen of Burlesque’ competition. She says that her very first exposure to burlesque was while on vacation with her beau in New Orleans. They happened on to the House of Blues and there was a burlesque show on that night. “What an introduction! Coco Lectric, Perle Noire, Ruby Joule, Athena and Foxy Flambeaux rounded out the lineup. We were both completely blown away!” Elle comes from a competitive figure skating background and says “Movement is my preoccupation. I am fascinated by how people express themselves, not a message or an idea but them – who they are, through movement.” Speaking of the New Orleans Burlesque Festival she says “After all of that build-up and the initial jitters, it really didn’t feel like a competition at all. The girls just made it so fun. It just felt like another show… with a hell of a cast!” We are so happy to be able to bring Elle Dorado to the Seattle audiences of our Moisture Festival.